Watching an episode of The Good Life last night, I realised how much we’ve lost as people in the way of skills and survival instinct.

We have become useless at survival. Everything is put in front of us at the supermarket. It’s all too easy. The first verse of Circle Of Life was heavily influenced by an old couple I witnessed in the supermarket moaning at the lack of choice for bog roll. There is over half an aisle given over to this product. These people were old enough to have been born during (or possibly just after) the war. Surely, even having one option for wiping their bums would be a luxury?? Obviously not, and it shows just how far we’ve slipped.

Gardening has become the domain of Anarchists and hippies. My Dad (as many people did) used to grow vegetables. It’s nothing new, so why has it become such an ‘alternative’ past time? I’m not saying it’s a bad thing, and I’m happy people are rediscovering how to grow produce, but it’s sad at the same time. Face it, most of the veg in supermarkets is utterly tasteless, over-priced, and full of chemicals.

Same goes for alcohol. Expensive, often fizzy and tasteless, full of chemicals and a bulk of the money goes to the government. 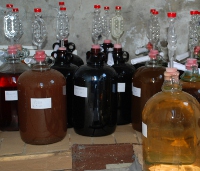 I don’t garden (due to lack of space/Scottish weather/living in a rented house/general laziness) but I do make beer & wine. Gallons of the stuff. I worked out yesterday that I have paid for roughly 12 bottles of beer so far this year. I generally don’t drink in pubs as I’m performing, or driving, or both. The rest is home-made, very tasty, natural and best of all, CHEAP!!

Come the revolution, backs against the wall, bop bop bop etc I’ll be swapping some of my alcoholic beverages for some of your carrots and cabbages, or bread and cakes.

But before then, we can be smug in the fact that (in a small way) we are taking profit away from the supermarkets and tax away from the government, whilst being kind to the environment.

This entry was posted in Health, Uncategorized and tagged alcohol, circle of life, gardening, government, home brew, home-made, self sufficiency, self sufficient, the good life, vegetables, wine. Bookmark the permalink.